As part of the iWATERMAP project from the Erasmus + program, which actively aims on the issue and improvement of innovation policy in the field of water management technologies, the first version of the so-called Self-Assessment, was prepared. The first version of document, which will be further updated during the project, was prepared by the cluster CREA Hydro & Energy as one of the project partners. The document is based on already processed roadmaps for the sub-areas of human resources, internationalization and critical mass development.

The presented graphic design shows in a simplified way the partial outputs of the mapping of the innovation ecosystem in the water management sector in the South Moravian Region, at three main levels - the development of critical mass, human resources and international cooperation.

The document is based on the political instrument of the Development Strategy of SMR 2020. The current version, using the Triple helix model, shows the connection within individual companies, universities and government bodies to individual activities of the iWATERMAP project. Development of the critical mass and the innovation ecosystem in water management is primarily influenced by the volume of funds obtained, as a result of which the cluster seeks more active involvement in EU programs. Development of human capital is captured by the lifelong learning model, which maps the particular steps of education in the water sector. Interregional cooperation is represented in self-assessment by participating in the pilot project PoVE WATER, the project of development of professional excellence, or by the representation of the South Moravian Region by the CREA cluster in the European platform Water Smart Territories. 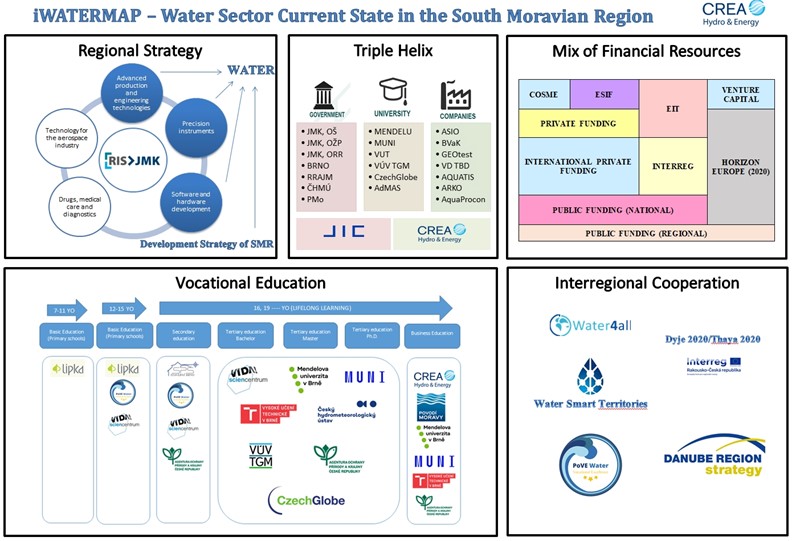